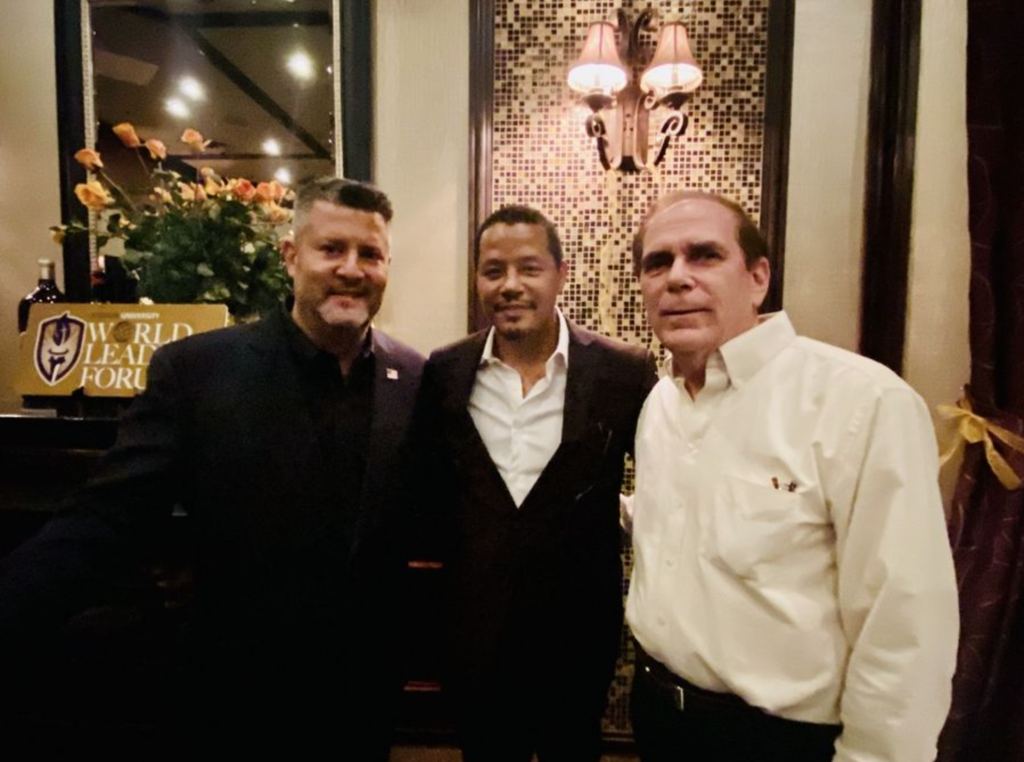 Actor and Entrepreneur Terrence Howard made an appearance at Chicago Prime Italian Restaurant in Schaumburg on July 9, which included attending a VIP dinner with 75 special guests. Notable attendees included former Illinois Governor Rod Blagojevich and Austin Rabine, the CEO of the Rabine Group, and the son and business partner of Illinois Gubernatorial Candidate Gary Rabine. Howard mingled with local diners and staff at the bustling eatery, while chatting and posing for photos.

Howard was in the Chicagoland area, and was a featured guest for Conversations with Mark Vargas earlier that day at Judson University in Elgin. Vargas, a Judson alumnus, hosted the discussion with Howard that featured topics such as his personal background, business ventures and the inspiration behind his success. During the event, Vargas and Howard announced they are launching a drone company, utilizing a drone Howard referred to as ‘Lynchpin’, and that Vargas will serve as President.

“There’s no doubt as to the caliber of Terrence Howard as an actor, and the buzz that is created anywhere he goes; that certainly was the case at our family restaurant,” said Chicago Prime Italian Owner Andy-John G. Kalkounos. “Everyone at CP Italian could feel the energy, and Terrence was so generous and kind. He found a way to connect with everyone in the building – it was really something to experience.”

Schaumburg Mayor Tom Dailly made an appearance at the event, and addressed the VIP crowd during the dinner program, where he, along with Kalkounos, welcomed Howard to the Village.

“Schaumburg is very pleased to welcome Mr. Howard. While being a recognizable and award-winning actor, he is also an exceptional entrepreneur,” Dailly said. “We are honored to host Mr. Howard in one of our Village’s premier fine dining establishments, and look forward to his future visits.”

Born in Chicago, Terrence Howard is best known for his Golden Globe Award and Academy Award nominated work in “Hustle & Flow”, as well as for his supporting role in the film Crash, among many other notable films and television shows. Howard starred as “Lucious Lyon” in Fox’s “Empire” television show. “Empire” is a hip hop family project from Lee Daniels and Danny Strong which co-starred Taraji P. Henson and Gabourey Sidibe, and ran for seven seasons. Howard also recently starred in Fox’s “Wayward Pines,” a 10-episode psychological thriller from EP M. Night Shyamalan.

Howard made his feature film debut in the 1993 movie “Who’s the Man?” In 1999, he was honored with the NAACP Image Award for Outstanding Supporting Actor, an Independent Spirit Award nomination and a Chicago Film Critics Association Award nomination for his role as “Quentin” in “The Best Man.” Howard was seen in major motion pictures such as, “The Best Man,” “The Best Man Holiday,” “Term Life,” Cardboard Boxer,” “Iron Man,” “Prisoners,” “The Butler,” “Dead Man Down,” “The Company You Keep” and “On the Road.” Additional film credits include Howard’s portrayal of Nelson Mandela, opposite Jennifer Hudson, in the film “Winnie,” his starring role alongside Cuba Gooding Jr. and Bryan Cranston in George Lucas’ “Red Tails”, as well as “Valerie Flake,” “Best Laid Plans,” the Academy-Award nominated “Ray,” “Pride,” “Get Rich or Die Tryin’,” “The Brave One,” and “August Rush.”

Howard began his career with several notable TV appearances on shows such as “Living Single,” “NYPD Blue,” and “Soul Food.” He became well known for his lead role in the UPN series “Sparks.” Howard also won a NAACP Image Award in 2011 for Outstanding Supporting Actor in a Drama Series for “Law and Order: Los Angeles.”

A self-taught musician, Howard writes, composes and produces music including “What the DJ Spins,” a hit featured on “Empire.” He also displayed his musical talents in “Ray” as Ray Charles’ one-time guitarist, Gossie McKee, and in “Hustle & Flow,” as rapper “Djay,” in which Howard performed all the tracks for his character, including “It’s Hard Out Here for A Pimp,” which won the Academy Award for Best Original Song. Additionally, his debut album, “Shine Through It,” was released in September 2008.

Howard resides in Philadelphia, Pennsylvania. The father of five has a strong interest in science and more than 50 patents pending based on his scientific research and pursuits. He is also an artist, and he creates incredible light sculptures influenced by sacred geometry.

Mark Vargas is a trusted adviser and close confidant to some of the most high-profile political and business leaders in America. His work as a tech entrepreneur in healthcare and as a political opinion writer have been featured in the Chicago Sun-Times, Chicago Tribune, Daily Herald, Huffington Post and Fox News.

From 2007 to 2010, Vargas served as a civilian within the Office of the Secretary of Defense on a special task force focused on rebuilding war-torn economies through foreign and private investment. In 2009, he was awarded the Global War on Terrorism Civilian Service medal. His civilian service at the Defense Department included 14 trips to Baghdad and expanded across two presidential administrations. He earned his Bachelor of Arts degree from Judson University, where he served as student body president.

Check Out Our Sister Restaurants